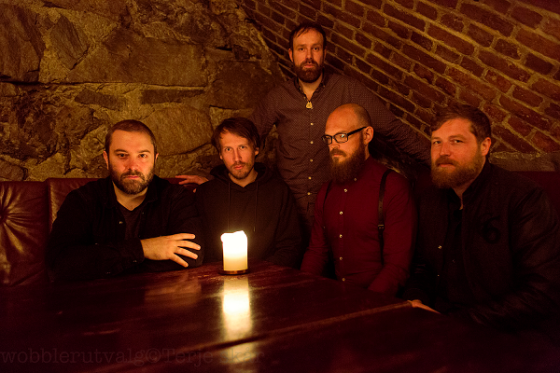 With just over a month to go until the release of "From Silence to Somewhere", the fourth full-length album from Norway’s leading Symphonic Prog band WOBBLER, Karisma Records have released a promo video which not only gives fans a taste of the music they can expect to hear, but also an insight into the band itself.

It is a fascinating glimpse into the workings of a group of people who, as they have matured and grown together as individuals and as musicians, have quite considerably changed the way they write and make their music. And most noticeably it is an example of a close and enduring friendship amongst the members of WOBBLER that gives the individual musicians the confidence to change, and exchange, ideas in a way that often takes an original idea in a completely unexpected direction, without egos getting in the way, and having a lot of fun while they do it.

The video can be seen below and at https://youtu.be/sqrqPG7MZwk

"From Silence to Somewhere", which is set for release on the 20th October, is comprised of four epic tracks that explore the idea of metamorphosis and alchemy. WOBBLER’s trademark sound, which makes use of copious amounts of Mellotron, Moog, Hammond, Chamberlin and other classical analogue keyboards, and of course the renowned Rickenbacker Bass, is very much in evidence.

It is an album with a darker, more introspective edge than WOBBLER‘s previous releases, but at the same time "From Silence to Somewhere" feels like a natural progression. Flamenco and Italian Renaissance music can be heard weaving their way subtly through the melancholy harmonies that are combined with powerful crescendos and high-energy, spinet-driven passages, whilst the guitar riffs range from the poignant to the edgy.

With artwork by Thomas Kaldhol (Samuel Jackson 5, Panzerpappa, Lukas Kasha etc) , and a running time of 47 minutes, tracklisting on "From Silence to Somewhere" is as follows:

1. From Silence to Somewhere
2. Rendered in Shades of Green
3. Fermented Hours
4. Foxlight

Formed in Hønefoss in 1999, WOBBLER’s current lineup features current and former members of TUSMØRKE, WHITE WILLOW, THE CHRONICLES OF FATHER ROBIN and JAGA JAZZIST. With Lars Fredrik Frøislie on keyboards and backing vocals, Kristian Karl Hultgren on bass, bass clarinet and bass pedals, Martin Nordrum Kneppen on drums, percussion and recorder, Andreas Wettergreen Strømman Prestmo on vocals, guitar, glockenspiel and percussion, and Geir Marius Bergom Halleland on lead guitar and backing vocals, the band can avail itself of a considerable array of instruments that have a huge, and very interesting impact, on the overall sound.

WOBBLER will be joining fellow Karisma Records band-mates TUSMØRKE and JORDSJØ at the Proggens Grøde, which will be held at the Kulturkirken Jakob in Oslo on the 29th September.

"From Silence to Somewhere", is available either as CD Digipak or Jewel Case, each with a 12 page booklet, as well as in Digital format. LPs are available either in standard black and in a limited edition Transparent orange/black marble vinyl limited to 500 copies only. CD and vinyl formats are available to pre-order from smarturl.it/Wobbler_Europe, or from smarturl.it/Wobbler_USA in the USA.

All formats, including digital, can also be pre-ordered at https://wobbler.bandcamp.com/album/from-silence-to-somewhere

New song: CLOAK – To Venomous Depths / Where No Light Shines