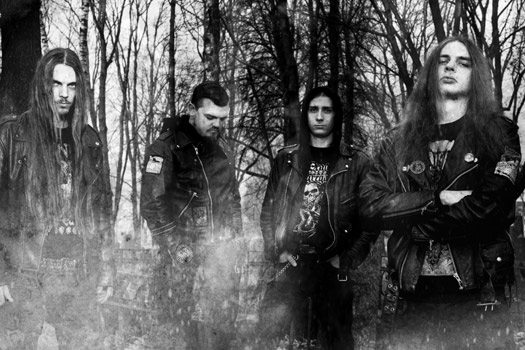 The band’s debut full-length "The Stench Of The Earth" will be released on 24th November 2017 on CD and LP (limited to 300 copies).

Originally founded in 2009, CRYPTS OF DESPAIR was fully revived in 2016 and evolved into a heavier and darker sound reinforced by an unusual approach of using two fully fledged vocalists with lyrical themes that include disgust and hatred towards humanity, death worship and the occult.

A first track entitled "Dead Light" and pre-order options are available at this location:
https://testimonyrecords.bandcamp.com/album/crypts-of-despair-the-stench-of-the-earth

CRYPTS OF DESPAIR are ready to spread their darkness all around the world! On 16th September they will support GRAVE MIASMA on their 15 year anniversary show in London (Boston Music Room, https://www.facebook.com/events/252666758566855).

Tracklist:
1. The Stench Of The Earth
2. Path To Vengeance
3. Pits Of Endless Torment
4. 77
5. Fleshless Eternity
6. Enslaved In Blasphemy
7. Possessed By Astral Parasites
8. Ravage The Earth
9. Monuments Of Fear
10. Dead Light