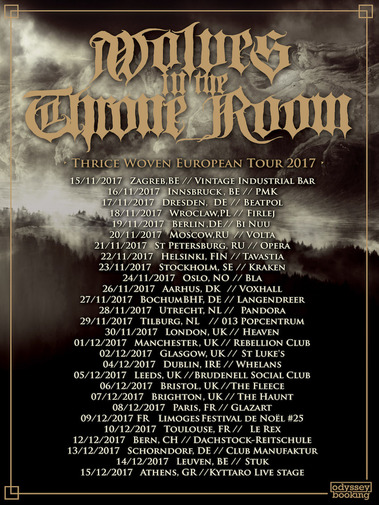 Thrice Woven, the newest release from WOLVES IN THE THRONE ROOM is due to be released on September 22nd 2017. A European tour has just been announced having the band performing almost 30 concerts in order to present this album to its European fans. Tour dates are listed below and more info about each city can be found here

The band made the following statement about the tour…"When we first came to Europe over 10 years ago we had no idea what to expect. Would we be accepted? Would we be hated? We could only pray that Europeans would understand what we were trying to say with our music. And so we got in the van and made our way across your continent. We met in celebration with metal heads in leather and spikes, goths, left-wing squatter punks, all kinds of artists and heart-warriors in the cities and countryside. All people of good heart and free spirit! We met so many amazing people who changed our lives and opened our minds. Thank you people of Europe. Now, the THRICE WOVEN era dawns upon your shores. Hail to the fans! Thank you! Aaron+WITTR"

Since their inception in 2002, Wolves In The Throne Room have accrued over 5 studio albums and hundreds of live performances reinterpreting black metal through their own Cascadian prism. Their songs explore the hidden world of magic that one accesses through dreams, visions and music and the resulting sounds are intimately linked to the wild lands of the Pacific Northwest. Now, a portal into the dreamworld of Wolves In The Throne Room opens again with their forthcoming sixth LP, Thrice Woven a glorious return to the blazing and furious Black Metal that they alone can create.

Thrice Woven will be released on September 22nd via Wolves In The Throne Room‘s own label, Artemisia Records.