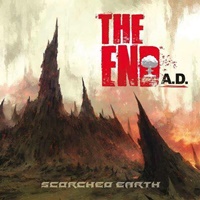 Forming in 2014, Philadelphia, PA is home ground for The End A.D. – an East Coast act that embraces their hardcore influences as much as their metal, making for a potent blend on their debut full-length album "Scorched Earth". The 12-song record runs the gamut from quicker hitting, heads down arrangements that get the job done in three-minutes or less like "Wendy O. Williams" or "Crawling from the Wreckage" to a sprawling, very doom-oriented seven-minute epic like "Voyage of the Damned", the latter rearing back to memories of mid 90’s era Overkill if put in a much more primitive context in terms of the production values.

As a vocalist, Otto Luck bounces around between more of a sing-song talk delivery and a mid-range wail – assembling everything from D.R.I. and Clutch to Black Sabbath and the above-mentioned Overkill, making for an interesting mix of styles to wrap your head around for "Germs Burn" and "Obsession (By Calvin Klein)". The musicianship also has that unique blend – the guitars churn in almost Voivod-like oddball shapes during the already-mentioned "Obsession (By Calvin Klein)", while possess that White Zombie/ "Thunder Kiss 65" gallop for "Day of the Locust", using flanger effects to elongate closing segments that roll into the next active sequence.

The kitchen sink approach for The End A.D. as far as diversifying their songwriting can make for a struggle to pinpoint what they want to achieve for the record – as it doesn’t feel very cohesive or coherent track to track. The acoustic instrumental "The Intercessor" provides a great, atmospheric breather midway through, but even at 44 minutes "Scorched Earth" seems to languish in riffs and hooks that aren’t sharp, crisp, or biting enough to warrant multiple listens.

Considering three of the members have moved on following this recording – including Otto, second guitarist John Plumley, and bassist Dave Carr (already replaced by vocalist Ami Friend and bassist Paul Orkin), we’ll have to see if the next set of material appears even stronger. At this point, this crossover metal group just doesn’t deliver the goods.

RICK BUCKLER – That’s Entertainment – My Life in the Jam