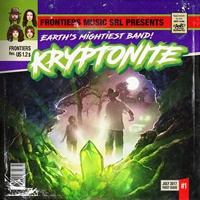 Once you establish your talent and a fan base, opportunities abound for musicians to flex their collective muscles and set their sights on new creative endeavors. Kryptonite is another example of assembling musicians from other known acts in the melodic hard rock/metal community and putting out their self-titled 11 song debut record. Singer Jacob Samuel comes from The Poodles, guitarist Mike Palace from Palace, bassist Pontus Egberg from Treat, and drummer Robban Back of Mustasch round out the four-piece – with the production duties under the capable guidance of Alessandro Del Vecchio.

The brighter chord combinations and keyboard touches push songs like "Keep the Dream Alive" and "One Soul" into pure AOR/arena rock heaven, the choruses larger than life. Mike’s guitar action may be restrained during much of the main parts to keep the songs focused, but there are times where he injects a bit of heroic flair – the heads down groove throughout "Get Out Be Gone" elevating heart rates. Jacob’s personality and comfort level to touch all facets of the genre makes him a superstar – be it on the House of Lords-esque opener "Chasing Fire" on through the bluesy power ballad "Across the Water", his charm and multi-layered harmonies can be savored again and again.

Supplementing the proceedings with three skilled keyboardists, the musical hooks just flow naturally – intertwining the best of classic hard rock arrangements with touches of modern spark. Favorites can change daily, but for my money the swirling keyboards against a driving guitar motif puts "Love Can Be Stronger" near the top, as well as the big booming AOR-oriented "This Is The Moment", that chorus a permanent fixture even after your initial exposure.

What’s also very cool is the comic book-oriented cover art – something you don’t really see very often from a melodic hard rock/AOR-oriented act. Kryptonite hopefully will continue and not be a one-off project, as these gentlemen can craft some killer tunes, chock full of understandable melodies and hooks that appease even the most critical of fans.