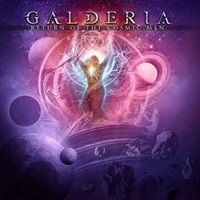 GALDERIA – Return of the Cosmic Men

French power metal with plenty of vocal harmonies on this second album "Return of the Cosmic Men". Galderia possess a unique situation in that much of the singing for these 10 songs contain dual or trio lead vocal moments between Sebastien Chabot, Thomas Schmitt, and Bob Saliba beyond their guitar, guitar, and bass duties respectively – making the choir element come to life during uplifting songs like "Legions of Light" and the driving anthem "Blue Aura".

Twin guitars and keyboards propel this material into terrain familiar to Iron Savior, Edguy, and latter day Gamma Ray fans – the riffing, double bass, and solid grooves align well with standard power metal expectations. You’ll have restrained keyboards and calmer guitar lines for the early verses of "Living Forevermore" before kicking into a commercial hard rock effort that has arena level appeal. Two versions of "Wake Up The World" appear as tracks six and ten for the record – the former a straightforward ballad treatment, while the latter something akin to a techno/cyber digital metal version that Amaranthe fans flock to. And a bit of a folk swinging movement penetrates "Celestial Harmony", with acoustic and electric guitars plus the tempo very bouncy against the positive lyrics ‘we are on our way/ to better days’.

There are times where the power genre can get a little over the top, bombastic, and err on the side of ridiculous. Galderia may sing of massive awakenings that take place on Earth in the hopes of mankind, but it’s hard to deny the catchy, hook elements that consistently run through every track. "Return of the Cosmic Men" could be that hidden gem of 2017 as a result, because of the feelings of happiness that spread through every spin.