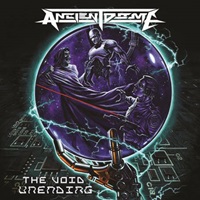 Previously impressed with their last studio album "Cosmic Gateway to Infinity" in 2014, these Italian thrashers return with "The Void Unending", another nine track effort that embraces a technical thrash and power stance beyond normal influences and output. Expect guitar breaks that are fluid and slightly longer than most acts, bass play that can rival some of the intricate riffing, plus vocals that possess a razor edge grit and more melodic stance that most within the thrash scene.

Neoclassical runs penetrate the conclusion of "Black Passage", an effort that brings everything from Forbidden and Heathen to VoiVod into the conversation – while the title track follow up doubles down on power riffing and up front bass parts from Giorgio Mina to put him in that Steve Harris caliber of prominence. Ancient Dome choose to sit into mid-tempo arrangements and flesh out ideas through twin guitar harmonies and shifting stop/start transitions sure to stir up audience action either in terms of stage diving, mosh pits, or all out head banging. Bursts of aggression punctuate "The Rules of Hate" – adrenaline fueled with a fine up-tempo performance from drummer Giorgio Alberti, able to go from solid groove mechanics to furious double bass parts without missing a beat. You just don’t hear many thrash acts these days willing to ride out cultural/melodic riffs or refrains to set up the next part sensibly – that’s what helps Ancient Dome stick out amidst a crowd of musicians content to repackage and recycle their favored 80’s Bay Area or Teutonic heroes. The clean, somber guitar lines that appear in the opening for "Fifth Dimension" give way to an outer space oriented instrumental, over the course of it’s almost five minute arrangement giving your brain a technical, progressive thrash history lesson in off-time signature mastery.

The majority of thrash fans will find "The Void Unending" too advanced for their palate- but for the segment of metal followers who want to challenge themselves, Ancient Dome achieve another fine platter for deep discussion and consumption.