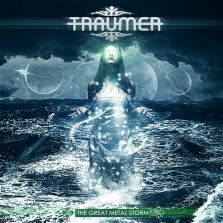 The Brazilian power metal outfit TraumeR is about to unleash this 13-track album entitled "The Great Metal Storm" via Fastball Music. Quite the over-the-top title, eh? Actually, "The Great Metal Storm" is an expanded re-issue in that it was originally released back in 2014, but it is now being given wider distribution by Fastball Music and to make it more appealing, two acoustic bonus tracks have been added. So, we are essentially dealing with a re-release of sorts here.

Like I said, TraumeR is rooted in power metal, which is to say that "The Great Metal Storm" is filled with epic guitar solos, majestic keyboards, and an awful lot of melodic riffs. Unfortunately, the vocals courtesy of Guilherme Hirose do not cut it for me and do not only lack passion and width, but are also slightly uneasy on the ear. The awful "Nights of Babylon" is the perfect example of what I mean. The sterile and flat production/sound of the album is also quite annoying at times in that many parts and even whole songs sound devoid of dynamics and energy, which means that it is way too easy to lose interest or focus when listening to this 60-minute effort. Very little stands out. On top of that, the band lacks an identity and a sound of its own. I could have forgiven the endless clichees that are on display on the album if the band possessed something that it could at least have called its own, be it some sort of sound, a trademark, or perhaps even an attitude, but sadly that is not the case. Some good solos and melodies and so on do present themselves from time to time, but each time I spin the disc I find myself thinking that I have heard it all before and that "The Great Metal Storm" brings nothing interesting to the table.

The best tunes are the Maiden-esque "Gates of Freedom" and "Eleazar  but the rest are forgettable, which is a damn shame. Still, who is to say that these guys will not improve in the future? From an overall perspective, "The Great Metal Storm" pales in comparison to a lot of other power metal albums out there.