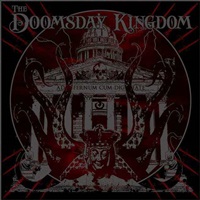 THE DOOMSDAY KINGDOM – The Doomsday Kingdom

When the creative pool overflows, you must dip in and squeeze out what you can, while you can. Bassist Leif Edling is probably best known for his work in Swedish doom metal band Candlemass – but he also has Avatarium and now The Doomsday Kingdom recording on a regular basis. Following a demo that Nuclear Blast picked up to release last year, a full-length had to be the next logical step – and that’s what we have here. Two of the songs make a re-appearance from that recording, as well as 6 new songs – and it’s another doom metal recipe for success.

Those who love slightly faster doom metal (mid-paced for sure) in that Dio-period Sabbath/Candlemass mold, along with a singer in Niklas Stålvind from Wolf who can carry those chilling melodies will find plenty to clap and cheer here. Guitarist Marcus Jidell rotates between rhythm parts that peel paint off the wall and lead breaks that soothe and stimulate the hair follicles, as the low, evil combination for "A Spoonful of Darkness" and "Neon Knights"-oriented chugging within "Hand of Hell" delight.  Midway through an instrumental such as "See You Tomorrow" which features piano and acoustic guitars beyond the orchestration doesn’t serve as filler, but a proper, thoughtful breather that is beautiful, engrossing, and a head turner. The best doom compositions to my ears transform feelings of despair into a calm, collected confidence – ready to tackle any challenge placed before you – and this record is chock full of winners.

The Doomsday Kingdom may relegate themselves to a studio-oriented act, but the listeners will have plenty to look forward to if this full-length has anything to say about it. Sturdy riffing, magnificent metal melodies, locked and loaded tempos, it’s all in there and more.