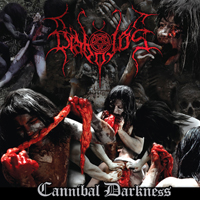 The US audio horror outfit known as Diabolos finally unleashed their debut onslaught of sinister and vicious black/death/thrash/punk metal via Bandcamp last year. Entitled "Cannibal Darkness", the ten tunes that constitute the album are sharp as a razor and revel in everything that is unholy and depraved. The riffs are like nails being driven into your skull while the drums underline and emphasize the pummeling and crushing nature of the music. Lots of dark and disgusting samples creep into the songs and add an ominous and gloomy atmosphere to the proceedings. The tortured screams and ferocious howl courtesy of Undead Torment will send shivers down your spine while the punishing and aggressive delivery of the whole thing will eventually overpower you, but the album will leave you begging for more.

While the "The Three Mothers" EP from 2006 had a slightly warmer and more fuzzy production, Cannibal Darkness" sounds hard, bombastic, and unpleasant. I love the unfiltered, raw, and wild feel of the EP, but this new assault of theirs packs a punch and is quite brutal. In other words, "Cannibal Darkness" sounds more controlled and focused, but that does not mean that it is not unpredictable and insane because it most certainly is. My favorite cuts include the hyper-intense "Maniac", the punishing and delightfully unpredictable title track, the strangely morose "Katchem and Killem", and the rather hypnotic and claustrophobic "Aftermath". Some nasty stuff all around!

If you worship horror movies then you owe it to yourself to check the Diabolos discography out as these guys know how to conjure up a gloriously wicked and mood-filled scenario filled with murder, cannibalism, despair, fear, blasphemy, and sheer panic by means of guitars, bass, drums, and vocals. This is supreme underground horror metal for all you sickos out there performed by a foul trio. Stop reading this shit and head on over to Bandcamp this very instant in order to lose yourself in the cannibal darkness.