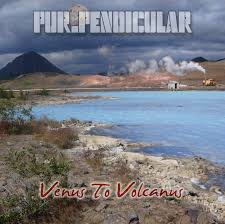 The Deep Purple tribute outfit named Purpendicular, which was formed by Irish-born vocalist Robby Thomas Walsh, is one of the most sought-after and popular Purple tribute acts out there today. The fact that legendary Purple drummer Ian Paice relatively often tours and performs with these guys is testimony to just how talented this international band truly is when it comes to covering and evoking the essence of Deep Purple on stage. Put it this way, I do not think Mr. Paice would have bothered if Purpendicular was a waste of time, if you catch my drift. What is even cooler is that the band’s upcoming album, the 11-track effort entitled "Venus to Volcanus", consists of brand new and original material. No cover tunes or anything like that. We are talking all-new tracks. On top of that, Ian Paice and former Rainbow keyboardist Tony Carey make guest appearances on one song, which is obviously pretty damn wicked.

Musically speaking, "Venus to Volcanus" is highly inspired by Deep Purple and Rainbow and so on, which is hardly surprising, but one can trace quite a few modern influences as well. It is not all-out retro rock that is on display here. Having said that, it is obvious that all the different eras of Purple serve as a source of inspiration to Purpendicular in the sense that some parts sound like they could have been present on the classic "Fireball" (1971) record while others are slightly more groovy and bring to mind the "Rapture of the Deep" (2005) album. In that sense, you could argue that although "Venus to Volcanus" is rooted in the progressive hard rock of old, it does sound strangely current somehow. For the most part, the songs are memorable and easy to absorb and digest, but there are a couple of semi-experimental compositions that are both challenging and interesting to dig into, namely "Absence" and "Trouble Man". My favorite cuts are the infectious "We Both Go Down" and the uplifting "No Rest". The opening track, the crunchy and dynamic "The Bullet", rules too. " I Can’t Win Them All" is another highlight. On the other hand, "Evil Tongue" and "End of Pain" do nothing for me and hardly contribute anything worthwhile to the album, but those are the only ones that fall by the wayside.

The interplay between the guitars and the Hammond organ is superb and the rhythm section is tight and solid, so no complaints there. In other words, the musicianship is excellent in every sense of the word. Speaking of musicianship, Ian Paice and Tony Carey are featured in the track named "Wonderful", which is one of the more funky and bouncy tunes to be found on this disc. Robby Thomas Walsh’s voice is both gritty and smooth. It covers quite a lot of ground but always with a sense of passion and intensity to it. In all honesty, it took me a little while to get used to it, but the more I listen to it the more I like it. A talented singer and charismatic front man for sure. The production is suitably vintage as well.

If classic hard rock and/or progressive rock turns you on then I strongly suggest that you check "Venus to Volcanus" out as soon as it becomes available. Like I said, the vibe and atmosphere of the record is very much in the vein of Deep Purple, which is basically all that needs to be said. This is quality rock done right!

DISBELIEF – The Symbol of Death