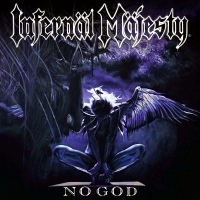 Infernäl Mäjesty (reference to Satan perhaps?) is a concoction of thrash and death metal with a little doom thrown in for good measure. Take "South of Heaven" Slayer, "The Power of Inner Strength" Grip Inc. (In God You Trust) and "Coma of Souls" Kreator and mix it with "Rust in Peace" Megadeth (House of War) adding equal measures of Mercyful Fate, Venom and Black Sabbath and some occasional gusts of Morbid Angelesque and Cradle of Filthian fills (Systematical Extermination), pouring some Vader sauce over it all. Serve cold, evil and godless, unless you count the god of this world, Satan, that is. The Canadians are everything Slayer used to be and no longer is, the old Slayer we miss, love and will never get back especially now that Jeff Hanneman is journeying through Valhalla and the remaining members are desperately clinging to their fading legacy, Slayer increasingly sounding like its own derivative, the overblown ghastly ghory superviolent videos vainly attempting to boost dwindling relevance and sales. I realize metal was never just about music but when did music take the back seat to image? Those ingenious haunting riffs, the devil may care vocals that actually sound creepier and more threatening than Tom Araya’s 10 fucks per second of every song he screams at the top of his lungs nowadays, the dark melodies and the seemingly effortless cohabitation with death metal, and above all, great memorable songs all of that makes me think this band, while comfortable, distinct and most importantly incredibly fresh in their own shoes, should quietly assume the position once held by the angels of death. Take it from someone who used to be a huge Slayer and Megadeth fan, is still one of their old stuff and lights up at any credible possibility of mixing the two in one potent Thor’s hammer of a motherfuck as was the case with now defunct Grip Inc.

Prime examples of what I’m talking about, "Signs of Evil" and "Nation of Assassins" (the latter no doubt a stab at the USA vis-a-vis the false 9/11 flag) at first seem like simple songs Mötley Crue, who I can’t stand anything about, could fart in their sleep, but upon closer introspection reveal themselves to be complex Slayeresque Megadethian thrashterpieces Vince Neil, Nikki Six and Tommy Lee wish they had the talent to construct. Much like with some better Slayer and Megadeth songs, Infernäl Mäjesty appears to be simple and easy listening on first spin and, to borrow from Dave Mustaine’s description of his own craft, evolves in your ear and brain into thrash metal baobabs of intricate detail. Lyrically you may snicker at and question the atheism and disdain for the global religious system from a band who extols the might of Satan who is nothing less than the very system they decry, but you can’t deny the power of the chords (Another Day in Hell) these guys spew forth in the construction of some of the most satisfying thrash/death since "South of Heaven" or "Extreme Aggression". And didn’t Tom Araya used to admonish us to read between the lies of the altar boys of sacrifice he kneels before every Sunday while Jesus saves? We’re all hypocrites to some extent, we’re all whores according to Jim Morrison and no one is innocent muses Tool’s Maynard Keenan. In the end what matters the most is music and Infernäl Mäjesty’s is top notch music, with different tempos within and without, little acoustic breaks, changes of pace, all of which make for a great listen every time you fire it up, as you walk away with more than when you first begun. And I love the more experimental and varied side B along with the epic ballad ending of the album even if they sometimes appear to meander like Annihilator on some of their albums, perhaps not necessarily in an attempt to artificially prolonging the song but nevertheless creating that exact impression, as if.

Despite its few shortcomings, "No God" is a satisfying meal for those maniax who miss the good old thrash that liked to have unprotected sex with death metal and never thought much of what terrifying offspring they could create in the process.