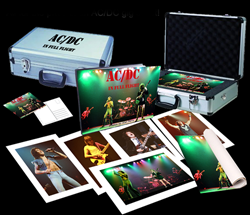 «AC/DC in Full Flight» is a thing of beauty. The ever-awesome Wymer Publishing in the UK released this fully independent publication a little while ago, and I must say that I am quite blown away by this one. In a way, it is not really a book in the traditional sense of the word, but rather a collection of AC/DC concert photos dating from 1978-1982. Now, that may not sound all that exciting on paper, but the thing is that most of these photos have never been published or seen the light of day until now. In addition, this 128-page slab of greatness is limited to a mere 500 copies. On top of that, countless pictures of different memorabilia such as ticket stubs, press reviews, quotes by different members of the band, and so on are scattered throughout the book, which means that you will not merely be glancing at concert photos when immersing yourself in this gem. Also, it comes with its own individually numbered flight case, an A3 poster, a bunch of postcards, and a handful of A4 prints reproduced on high quality 400gsm offset paper. If that does not excite you then you are truly a lost and worthless cause!

Not only is «AC/DC in Full Flight» is a true collector’s item that any serious student of the band ought to check out as soon as humanly possible, but it also marks an extremely important and crucial time in the AC/DC chronicle, more specifically the last tours and tragic loss of Bon Scott followed by the arrival of Brian Johnson and the monumental 1981 and 1982 tours. Photographer Alan Perry caught the band live at the Coventry Theatre in 1978 and at Wembley Stadium the following year as well as the Monsters of Rock gig at Donington in 1981 and, finally, the 1982 performance at the Wembley Arena, and I must say that I am impressed by these photos of his. They perfectly capture a band that was firing on all cylinders regardless of whether we are talking about the Bon Scott-fronted version of the band or the one with Brian Johnson at the vocal helm. As I love both, I very much cherish the fact that "AC/DC in Full Flight" visually documents the end of the first era and the beginning of the second one, not just because they are historically interesting, but also because both eras are extremely fascinating in terms of the albums AC/DC recorded in the late 70s and early 80s. Both line-ups had that undefinable spark, that unlimited amount of intensity, and that inhuman drive to deliver kick-ass rock ‘n’ roll and showing their fans how to have a great time regardless of whether they were playing small theaters and clubs or headlining large stadiums and festivals. I guess what I am trying to say is that Perry’s photos scream energy and manage to convey what it feels like to witness the band live on stage. That old cliché about photos and pictures saying more than a thousand words rings true in this case. The other thing that I keep thinking whenever I browse "AC/DC in Full Flight" and study the ticket stubs, the quotations from different contemporary music publications, and the interview excerpts and so on, is that Perry presents us with a visual narrative that has a chronology to it as opposed to merely handing us random photos spanning, say, five decades. I love the fact that this book focuses solely on those pivotal years and offers such a valuable glimpse of what the band radiated on stage during that time, and Perry’s own comments put all the gigs and events into perspective nicely. When you glance at these quality photos from those two eras, it immediately becomes clear that both line-ups were very much present on stage and utterly charismatic on all fronts. In fact, there is hardly one single photo of Angus Young in this cool collection that shows him standing still on stage; the little fella is constantly in motion.

The fact of the matter is that Wymer Publishing has released some of the best books and biographies and so on out there. "AC/DC in Full Flight" is no exception and fits right in with what Wymer is all about. It offers something different and unique, and it is truly awesome to have a collector’s item with a lot of historical relevance to it hit the market today now that AC/DC may be nearing the end of a glorious career. Get this book before it is too late!