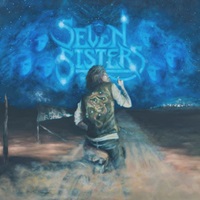 The old saying is, what comes around goes around. The same can be true in the metal scene, where a lot of newer generation musicians feel the need to create traditional heavy metal brimming with melodies and harmony out of the 1970’s/1980’s bevy of bands that first developed out of the UK and beyond. Seven Sisters hail from London, England – together since 2013 and issuing a demo and single in subsequent years to set the stage for this debut, self-titled debut album.

Right out of the gate you can’t help but be swept away by the energetic riff and lead break/twin guitar action from Kyle McNeill and Graeme Farmer – it’s straight out of the legendary NWOBHM school along with a touch of "Thundersteel" era Riot, as visions of Angel Witch, Iron Maiden, and Satan come into clear view for "Highways of the Night" and the explosive follow-up "The Silk Road". Smartly executing brief transitions of tender restraint before moving into the next horns up musical madness, there’s just so much old school action going on that favorites are hard to name, never disappointed with each successive airing. Kyle also doubles on vocals, and he has a killer high natural range that has an epic slant (think everyone from Angel Witch to Witch Cross here), using all the tools of the trade to engage on the twin axe prominent "Pure As Sin". The production values also take on an analog texture – as pure and natural as one would hope for, leaving samples, computers, and mechanical means for another band.

Heads down tempos and a set of anthems for the current generation to embrace, Seven Sisters assuredly deserve all the accolades spread across the press worldwide. Can’t be long until we find them near the top of the bill for Brofest and gaining great slots at European festivals like Keep It True or Headbangers Open Air. Eight songs and close to forty minutes, "Seven Sisters" will be a debut album not soon forgotten for those who miss the glory of heavy metal.