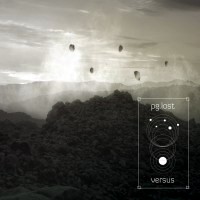 In their own words, PG.Lost is "post rock/indie experimental instrumentalism, orchestra of the heart, a playground for the long lost sporadic thoughts of giving in or getting back, a Swedish band of many directions, but most of all a band throbbing with great melancholy grinding against the precious high hopes of not just individual human thinking and feeling, but also contrasts within pushing the sonic boundaries of endless instrumental experiments of prolonging".

Is it true? Indeed, if the magnificent, multilayered, exceedingly romantic and hopeful title track is any indication. Reminiscent of Paradise Lost’s Depeche Modic "Host" album, the song ebbs and flows resonating with energy and light which gets dampened with a sludgy riff in the end. The guitarists, the founding Mattias Bhatt aka Stikkan Flawless and Gustav Almberg, paint fascinating pictures now akin to The Edge’s (U2) (Ikaros, Off the Beaten Path) (while also recalling Coldplay in the opener) now David Gilmour (Pink Floyd) (the closing A Final Vision) while heavily relying on Alan Wilder (ex-Depeche Mode) in the aforementioned title track and "Deserter" which reminds me of "Twin Peaks" theme for some reason. Time spent with PG.Lost is definitely not lost (pun intended) and "Versus" the song can be my new anthem of hope that I currently crave. The overall impression is aided by thick, impressive and audible lines of Kristian Karllsson’s bass as well as Martin Hjerstedt’s innovative and varied percussive power as I hear some Marilyn Manson and Smashing Pumpkins "1979" (Off the Beaten Path) as well as Pink Floyd’s "Darkside of the Moon" psychedelia in the closer. The excellent production that emphasizes every detail contributes to the overall experience, as well as the replay value.

While PG.Lost is not exactly metal neither are they far from it as the thick sludgy guitar layers of the aforementioned songs indicate. I like how each track is unique and has its own vibe but I feel like, excluding the triumphant closer, the second half of this 7 cut album is mellower and repetitive ("Deserter" and "Along The Edges" not only similar but right next to each other), almost as though the band peaked with the title track only reinforced by the closer. In the end, again to quote the band for a fitting closing sentence, PG.Lost "does have a way of sounding like a deep emotion or unresolved issues, so no wonder a fraction of us get confused, and start mistaking their music for something private"