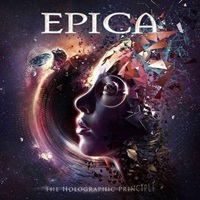 The eighth studio platter for Dutch symphonic power metal band Epica "The Holographic Principle" is another sprawling 12 track, 72-minute platter that embodies a more is more emphasis – pushing parameters in terms of choirs, keyboards, and extremity while adding in some fresh exotic nuances. As a six-piece, the ability to paint aural pictures in prisms gives these musicians a sense of freedom – which becomes apparent during the first two vocal songs "Edge of the Blade" and "A Phantasmic Parade". The former contains bright keyboard parts that glide triumphantly against the power and staccato-ish riff switch ups, while the latter has a Middle Eastern theme running through the vocals and music, a probably fan favorite should they choose to emphasize this track in their live sets.

Simone Simons and rhythm guitarist Mark Jansen handle the clean and extreme vocals – offering the proper contrast depending on the needs of a song, be it roller coaster oriented for "Universal Death Squad" or the symphonic sitar swirling "Dancing in a Hurricane" that starts off relatively restrained before hitting electric overdrive halfway through. The choir passages remind me of classic Therion, giving the 7:48 "Divide and Conquer" a triple threat vocal attack, choosing to be very alluring in tandem with the instrumental build-ups and slightly progressive rhythm section work. The 11:35 title cut closes the proceedings in exhilarating fashion – containing everything from soft piano strains and chants to furious extreme power/symphonic sections that rival the best classical compositions.

There’s a reason why Epica are headliners in multiple markets – they know their craft, the accentuate their strengths in terms of dramatic songwriting and performances, and as a result you get an experience not soon forgotten. "The Holographic Principle" keeps the band at the top of their game.