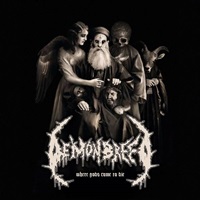 DEMONBREED – Where Gods Come to Die

Considering four-fifths of this German death metal unit came from Lay Down Rotten, it shouldn’t be that much of a surprise that we have an experienced quintet even if Demonbreed started last year. "Where Gods Come to Die" is an old school death debut album, the 12 songs living in a time vortex where nothing past 1994 exists – low-tuned guitars, buzzsaw bass, throaty growls, and pounding drums the weapons of employment.

A workman’s approach that keeps the material moving along at a steady three to four-minute clips, songs such as "A Thousand Suns Will Rise" and speedier, trill-filled "Empty Grave" make you think of the classic days of Entombed, Unleashed, and a bit of Bolt Thrower. Vocalist Jost Kleinert has two levels of deepness and brutality, conveying everything from old Dan Swanö to David Vincent in his chilling delivery. Really shouldn’t be a surprise to hear a "Purgatory Afterglow" / Edge of Sanity cover, "Blood Colored" being a well-suited choice as it allows the band to give a groovier number and alternate between the clean verses and atmospheric instrumental transitions. And when the band decide to switch it up from a speedy start to a mid-paced stop/start change, prepare for crazed audience antics as "Vultures in the Blood Red Sky" lives up to its title.

There’s just something primal and dirty that Demonbreed deliver in these songs – fierce, raw, and piercing as death metal should be. Nothing against the progressive and technical sides of the genre, but for my money you can’t beat the all-out assault of the senses when the speed and riff whir for "Seed of Ferocity" roars through your speakers. As a result, "Where Gods Come to Die" should delight a boatload of old-school death metal heads, and hopefully introduce some new people to the fold.