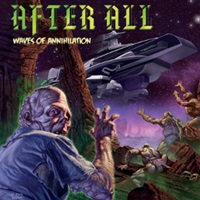 AFTER ALL – Waves of Annihilation

The ninth studio album from Belgian speed/thrash act After All comes hot on the heels of last year’s "Rejection Overruled" EP- the debut of new drummer Bert Guillemont to the quintet. Starting back in 1987, guitarists Christophe Depree and Dries Van Demme steer the axe work with a triplet laden, thick power approach similar to the discographies of Artillery, Heathen, and Paradox. The band employs a lot of start/ stop techniques which then set up the next rapid fire salvos on the drums and guitars – check out the double barrel kick and rhythm attack for "Target Extinction" as vocalist Sammy Peleman uses a melodic mid-range to slightly higher delivery to carry the melodies in a Forbidden meets Heathen way.

When After All slow down the proceedings (relatively speaking), you still get a lot of crunchy riffing and head banging fueled parts – the type within "Fall in Line" where the audiences will shout, scream, and cheer in unison as bassist Frederic Vanmassenhove provides a hefty low end thump that grooves in tandem with the shuffling drum parts. Keeping most of the material in a tight 3 to 5-minute window allows the listener to grasp the ideas quickly and move onto the next song – and you’ll also get some killer piercing bird call screams and rougher growls during "None Can Defy" as well as a lot of twin guitar harmony lines that make "Restore to Sanity" another favorite.  Even when the obvious reference point comes up (80’s Metallica) during the extended instrumental section for the 6:25 "After the Hurt Is Gone", the lead break has more of a NWOBHM feel without shredding arpeggios, a major feather in the dynamic cap of the band.

You just don’t hear many speed/thrash bands these days that go for tight down picking and a flurry of triplets, plus have a stellar vocalist to hold down the singing duties. After All stand above the pack as a result, and "Waves of Annihilation" is another prime time record for musicians and listeners to cherish.