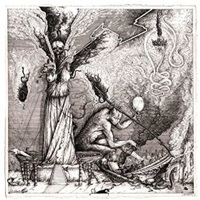 GUTTER INSTINCT – Age of the Fanatics

Back to basics death metal still is a viable trade in this genre. Sweden’s Gutter Instinct, together since 2012, embrace the primal spirit of the movement through their debut full-length "Age of the Fanatics". This is my first exposure to the band, who released a demo "Obedience" in 2013 and "The Insurrection" EP last year – but it certainly will not be my final experience. Venomous vocals, abrasive, breakneck riffs, that evil low bass tone, and a drum sound that is equally punchy to the bone in that punk/speed fusion pissed off manner come together for 10 tracks that harken back to the early days of the movement.

A churning chainsaw buzz permeates the riff construction, as Hannes Hellman and Oscar Persson use their guitars as lightning rods of demonic possession – galvanizing the title cut and "Death Cult" to European death heights rarely approached in today’s more technically driven scene. The blackened trills and blast beats for "Bloodstorms" serve as mood enhancement for the torturous screams and growling bellows from Thomas Ernemyr – conjuring memories of the best horror-oriented vocalists in the death/black business. A 5 second doom intro quickly gives way on closer "Exile" to the up-tempo death roar, Gutter Instinct taking no chances outside of a comfort zone in the brutality game – although the mid-tempo transition can give the listeners a bit of a dynamic, groove-like surprise amidst the speed and fury.

Not for the weak, "Age of the Fanatics" could be a sleeper hit in the underground community. It’s got enough of that Entombed ethos while being crust at times, and rooted in a lot of the looseness that made hair follicles stand on edge when first taking in this style. Probably will make a lot of top critical and fan favorite lists.