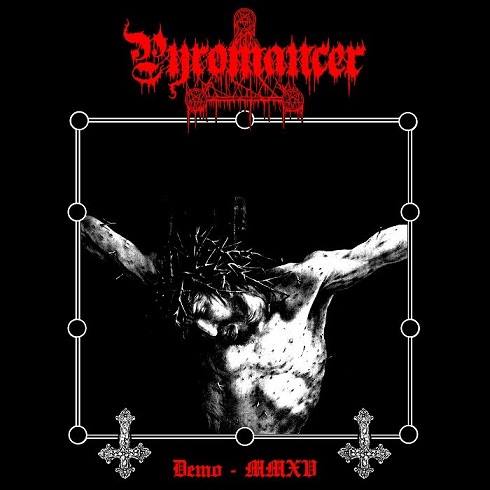 The blackened death metal duo named Pyromancer, which hails from the US, released this rather cool and bestial demo (appropriately entitled "Demo MMXV") on tape last year, but, unfortunately for some of you molly-coddlers out there, it was then released on CD by Gods ov War Productions just a few months ago.

Primitive, brutal, ugly, and filthy black/death metal is the name of the game here. Pyromancer brings to mind other unholy acts such as Blasphemy, Conqueror, Archgoat, and Amputator, but they possess a sickening and nasty charm of their own that I find both appealing and appalling. The riffs are quite catchy and memorable, and the raw and chaotic sound evokes a morbid and sinister atmosphere that is pretty captivating. The vocals are diabolical and convincing. Even though this release only contains 5 wicked tunes and a total playing time of 13-14 minutes, it is so intense and in-your-face that a quarter of an hour of this stuff suffices and is more than enough to get Pyromancer’ point across.

"Demo MMXV" is neither original nor innovative, but it is solid and intense from start to finish, and, truth be told, it is way better and more interesting than what so many other "war metal" bands out there are trying to do. Also, the rather archaic-looking artwork/layout suits the song material perfectly. Check this out the next time you are feeling depraved, especially the awesome track entitled "Inferno"!