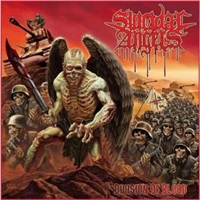 Even as the touring jaunts increase, Greek thrash band Suicidal Angels regularly crank out a new record every two years like clockwork – as "Division of Blood" is the sixth full-length since 2007, and hot on the heels of their first live album "Conquering Europe" from this spring. Rumbling through another nine songs of mid-paced to slightly faster material, it shouldn’t be a shock to the system that the band cultivate a sound resonating most with fans of 80’s era Slayer, Exodus, and late 80’s to early 90’s Kreator.

Between guitarists Gus Drax and Nick Melissourgos executing razor sharp start/stop action as well as tag team rhythms and bassist Aggelos Lelikakis and drummer Orpheas Tzortzopoulos holding down the bottom while churning along for the rollercoaster ride – you get tracks such as "Eternally to Suffer" and "Bullet in a Chamber" that pour on the adrenaline-fueled thrash as if lives were on the line. So what if the latter has a little mid-tempo riff that tips a cap to "Raging Waters" from Testament, Nick’s speedy roar contains more of a John Kevill/ Tom Araya spirit than anything Chuck Billy-oriented.  This deep into their career, experimentation is secondary to songs that will move from studio to stage seamlessly – even as the leads get crazier or the tempos get pushed to the speed max as "Cold Blood Murder" illustrates.

Add in Ed Repka’s skull fueled military cover art and a sharp attack-mode production and you’ll get 35 minutes of speed, intensity, and blood boiling thrash that owe a ton of passion and execution from the Bay Area 80’s scene. Sticking to shorter arrangements this time around ("Divide and Conquer" had 3 six-minute plus cuts) makes the impact of "Division of Blood" more immediate, and doesn’t disappoint.

INQUISITION – Bloodshed Across the Empyrean Altar Beyond the Celestial Zenith