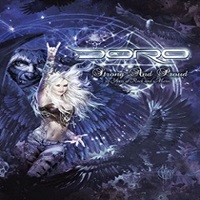 To celebrate her 30 years in rock and metal, Doro felt the time was necessary to release a live documentation of her discography. Only privy to the audio CD for reviewing purposes at press time, know that there are formats available in 2 Blu-Ray, 3 DVD, plus multiple double vinyl options. We get 14 songs and over 70 minutes of material that includes some covers and special guests as well as favorite from the Doro and Warlock catalogs.

A surprise four songs in would be the Blaze Bayley duet for Iron Maiden’s "Fear of the Dark" – a song that Bruce Dickinson originally sang but works very well with Blaze’s dramatic, fierce range. We also get "Für Immer" with Uli Jon Roth as guest guitarist, dedicated to Ronnie James Dio, and "Balls to the Wall" featuring Udo. Recent songs from her last studio album "Raise Your Fist" factor in like "Revenge" and the title cut, as well as a couple of old Warlock classics like "Hellbound" and closer "All We Are". Doro is the quintessential metal singer – enthusiastic and up for elevating the crowd energy, especially for those 70,000 plus strong at Wacken.

If you are a fan of Doro and the history of heavy metal, this is a no-brainer pick up. While many are now hip to the female musician ways of today’s scene, remember that Doro was there playing strong and tough three decades previous. Her voice has no lost one ounce of charm or soaring capabilities. "Strong and Proud" will hopefully tide people over before her next full-length studio release – and is a reminder of the great catalog of material that exists in the heavy metal realm.