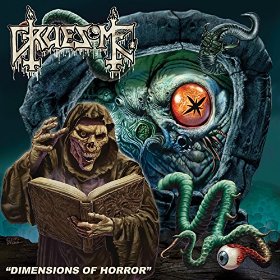 I really loved these guys first time around. I thought their take on and love for Leprosy-era Death was a praiseworthy endeavour. Apart from giving us more of what we like, the songs actually worked and their debut was a very solid death metal album in its own right. At that stage all I wanted was more.

Now that I have what I asked for, I’m not too convinced. Perhaps you could say the novelty has worn off, but Gruesome aren’t really a novelty act – they are a storming death metal ensemble. Yes, it does sound like Death once again and conjures up favourites such as ‘Beyond the Unholy Grave.’ Only with better production and no fear that Chuck’s vocal technique is going to change. But this time the corpse remains unanimated. The songs aren’t of the kind of quality they were and the set up feels a little contrived. That is not to say that there is anything cynical (pardon any play on words) going on – these guys love Death as much or more than the rest of us. But ultimately ‘Dimensions of Horror’ feels like nothing more than a collection of B-sides from the early days. Yes, it has its moments, but overall the songs aren’t strong enough to carry this one over the line…

SINNERY – A Feast of Fools