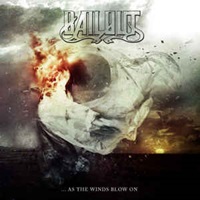 BAILOUT – …As the Winds Blow On

Together for five years and with a demo plus EP under their collective belts, Finnish alternative hard rock band Bailout feel the time is now to release a debut full-length record. "…As the Winds Blow On" contains 9 songs of fairly energetic, up-tempo material, very much in line with a lot of 90’s to current modern hard rock in terms of uplifting, easy on the ear melodies and occasional flashiness in the guitar department. Vocalist Joel Vuohelainen doubles on trumpet duties, while the dual guitar harmonies during "Superficial Memories" should get a charge out of the older crowd.

Shinedown, Hoobastank, and a touch of maybe classic rock (i.e. Rush, Wishbone Ash) are the foundation of Bailout’s platform stylistically. Occasionally the band shows flashes of their seasoned musical ability during the instrumental sections of certain songs like "A Call to Leave" where drummer Antti Rantavuo lays back into this hi-hat/ snare groove while Joel trumpets about in serenity or the more partially acoustic driven "Lost" where sparse, measured notes are used during the conclusion in a echoing, circular fashion for dynamic punch.

Privileged to review their "A New Day" EP from 2012, this record is filled to the brim with addictive, catching vocal harmonies and a strong musical foundation to match things up for long-term retention purposes. When I need a break from metal, "..As the Winds Blow On" gives me that boost to get through the day, perfect for rolling across the highways and byways with the windows down and the wind whipping through the air. Good stuff indeed.