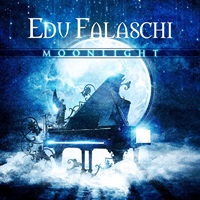 Dedicating this special recording to his 25th anniversary in the music industry, ex-Angra/ Almah vocalist Edu Falaschi felt the time was ripe to present stripped down acoustic versions for some of the most significant songs in his career. Choosing a number of respected Brazilian musicians in the jazz and classical community, this is certainly a left field outing and not intended to be a ‘metal’ record.

Angra favorites like "Nova Era" from "Rebirth" and "Spread Your Fire" off "Temple of Shadows" showcase a subdued, almost lounge-like atmosphere in terms of the piano play, Edu using more of a restrained, lower register that really turns these heavier originals upside down – in a good way of course, but the heart of the melodies and performances are still there. "Breathe" comes from the self-titled Almah debut, containing great acoustic guitar picking, tender piano strains and hand drums, while the follow up "Angels and Demons" has the flute and piano handling a lot of the progressive stair step instrumental action, almost bringing the track back to early 70’s Yes/ Genesis memories while the classically-oriented piano break bristles with sophistication. It’s also nice for us to get "Bleeding Heart" – originally a Japanese bonus track on the Angra "Rebirth" record, Edu reaching deep into his soul for this beautiful arrangement.

As warned ahead in this review, this is primitive Edu on a musical standpoint – not heavy metal in the slightest. "Moonlight" should gain its fair share of appeal though – including those who maybe otherwise would not have checked this out in the light jazz and classical communities. Let’s hope that we have more long-term anniversaries to celebrate, the world deserves to hear more Edu Falaschi songs.