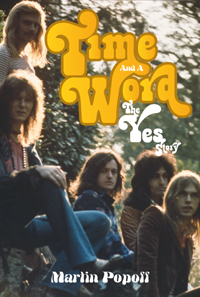 MARTIN POPOFF – Time and a Word – The Yes Story

The well-known and highly respected author Martin Popoff neither fails nor disappoints. I have read more of his works, be it books, reviews, or articles that I care to remember, and he has never let me down. The way in which he writes is simply…well, I guess inspirational is the word that I am looking for. Anyway, the excellent new book of his entitled "Time and a Word – The Yes Story", which, as the title suggests, chronicles the entire life story of the progressive rock gods Yes, may well be one of his best yet.

As many of you undoubtedly already know, the story of Yes is extremely convoluted and complex due to the insane amounts of album releases, live albums, compilations, side-projects, solo albums, and, last but not least, the countless line-up changes over the years. In my opinion that makes for a captivating and interesting band history. Some Yes purists might disagree with that, mind you. One of the many things that blow me away about this book is the attention to detail and the borderline fanatical research that Popoff has conducted in order to tell the riveting and fascinating story of Yes right. While the entire narrative is structured around a timeline and presented chronologically, various bits and pieces from interviews complement every entry. In addition, Popoff reviews and touches on countless album releases throughout the book, which is to say that there is a lot of stuff revolving around Yes that you can tap into here. You get the years and the dates, countless interviews with members and non-members of Yes, reviews, trivia, and fun facts. Popoff also looks at Yes in relation to other significant happenings within the progressive rock movement, so there is a wealth of information to process. In fact, I plan to re-read this again very soon as there are so many things within its pages to absorb. Pretty much everything you need to know about GTR, Asia, and Rick Wakeman’s many outrageous extravaganzas is included as well.

Whether you are a fan of Yes or of progressive rock in general, I dare say that "Time and a Word" will enthrall you. This is not merely a story on and about music; it tells of how a few excellent musicians interacted with each other in order to conceive and create timeless records that are still popular some 30-40 years later. It is about triumphs and defeats, personal loss, creativity, musical victories, bravery, inspiration, hope, and fierce pride. Soundcheck Books in the UK deserve some serious praise and respect for releasing some of the best and most thorough books on bands and music today, one of which is "Time and a Word – The Yes Story". Mr. Popoff, if you are reading this, know that this book rules and that we love you!