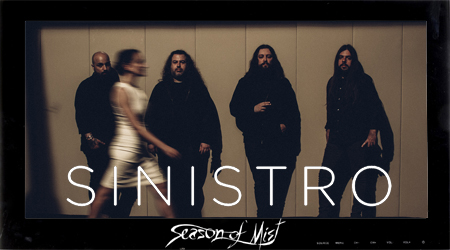 From their forthcoming fullength

Portugal is well known for its fascination with the morbid. Death is part of daily conversation. Its national chant, Fado, is the musical incarnation of melancholy and painful longing called "saudade". And the country’s capital Lisbon only wakes up in the darkness of night.

From this unlikely location, SINISTRO emerged as an embodiment of both lush and devastating musical landscapes driven by five individuals from distinct art circles. Their new album ‘Semente’ ("Seed") is a fascinating exercise in amalgamating this national legacy into dark and fascinating sound. This unique music is quite hard to easily tag and file into a drawer. The mind tries tricks and attempts constructions like LANA DEL REY meets MY DYING BRIDE – only to drop the idea a minute later.

Looking for points of reference, SINISTRO might at any moment give reason for comparison with MASSIVE ATTACK, ENNIO MORRICONE, BOARDS OF CANADA, HOWARD SHORE, RADIOHEAD, FAITH NO MORE, ANGELO BADALAMENTI, DAVID BOWIE, SWANS, UNWOUND, MOGWAI, and CRIPPLED BLACK PHOENIX. Yet none
of these names dropped here will make sense at another sequence. It is very much up to each listener to determine their own points of reference.

SINISTRO have been cultivating such sonic exploration since writing their self- titled debut album, which was released in 2012 and delivered elegant doom rock combined with a soundtrack like approach that harvested praise from both public and critics alike.

SINISTRO’s following effort ‘Cidade’ (2013) welcomed singer Patrícia Andrade on board and went on to explore a massive wall of guitars combined with gritty keyboard layers and an emotional vocal performance. Backed by unanimous critical acclaim, ‘Cidade’ established SINISTRO as an essential name in the Portuguese music scene.

SINISTRO began composing ‘Semente’ in 2014. The band added a second guitarist to the fold, who helped push their unique style another step further. Keeping a cinematic feeling in the background, the Portuguese vary from abrasive musical thickness to a perfect sense of stillness, which portrays the urban landscapes of their homeland and its legacy with a strong visual presence. SINISTRO created seven brand new tracks that are bound to appeal to music fans of various genres. Now we shall leave you and kindly ask you to listen carefully to form your own opinion…