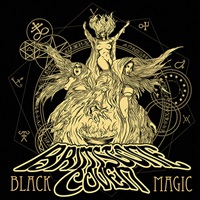 Wheeling, West Virginia’s Brimstone Coven made an impression on this journalist with their self-titled debut album in 2014 – so to say this was a heavily anticipated follow-up for these ears is an understatement. Straddling the lines of doom metal, stoner rock, and darker occult themes, the quartet relish the days of honing in on a particular riff and groove and hammering it home for all that it’s worth. Simplistic yet effect right out of the gates for the title cut, you get the feeling that Pentagram, Black Sabbath, Pink Floyd and Blue Oyster Cult all converge as the cowbell hits and repetitive, windy guitar passages echo incessantly in the aural landscape ready for a retro-escape.

Where Brimstone Coven succeed is the attention to dynamics – even when playing in a retro style with many times slower tempos, there still needs to be diversity in arrangements and where the musicianship can go full force or when to let things breathe. This foursome has that down pat – and as a result "Black Magic" is optimal for relaxation, letting the problems of your day sink away and come back to the world smiling.

Because there’s more to life than just metal, and not just the Scandinavian brigade can keep the retro movement alive and kicking for the current scene.

GEHENNAH – Too Loud to Live, Too Drunk to Die