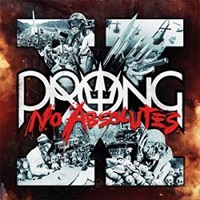 There’s something to be said for consistency in today’s scene. Veteran acts may have established themselves in a period pre-internet – but it doesn’t mean they aren’t working as hard (if not harder) to keep their current records as relevant as their past discography that put them in the spotlight. "X- No Absolutes" is the tenth original studio album from Prong, coming off of a recent covers-only record last year "Songs from the Black Hole" which allowed guitarist/vocalist Tommy Victor and his rhythm section the chance to dig out a lot of their influences and great songs from the past.

Prong isn’t going to flip the script in terms of their sound: it’s a post-thrash, semi-industrial style that is lean, muscular, and quick to hammer home the point. "Ultimate Authority" which starts the record off has a jumpy riff and rhythmic nature- Tommy switching off between these hypnotic, alternative clean verses and then a propulsive chorus sure to be championed and screamed by thousands on tour. The mid-tempo stomp factor of "Without Words" sounds as cutting and fresh as when we first heard numbers like "Beg to Differ" and "Prove You Wrong", while the energetic "In Spite of Hinderances" has a lot of early Bay Area thrash meets hardcore spunk, the electricity a juggernaut in this quick hitting 2:45 cut.

Bassist Jason Christopher takes a little bit of the hook lead on the more commercial-leaning "Ice Runs Through My Veins", and as a power trio with drummer Art Cruz the band put the focal point on solid performances without a lot of studio trickery. What you hear from Prong is what you’ll get when hearing the material live – just at a louder volume. At 12 songs and 41 minutes, "X-No Absolutes" keeps Prong riding the consistency wave, sure to appease the long-timers and hopefully recruit new members to the fold.