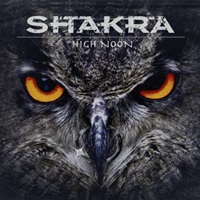 Swiss melodic hard rock band Shakra make another vocalist change – but this time it’s a return to Mark Fox who held down that slot for most of the 2000’s. Sure it may have taken some convincing behind the scenes when John Prakesh left in early 2014 to smooth out any bad feelings, but professionals that they are the quintet is ready to rock on their 10th studio album "High Noon". If you are familiar with the discography, energetic hard rock with a guitar charge and gritty vocals plus a steady rhythm section drives the material in various anthem, mid-tempo, or ballad templates.

Occasionally a little darker emotionally and using heavier, slightly down-tuned guitars to convey this aspect puts the title track for instance in one of those see-saw balances between their past while also acknowledging and respecting artists of today such as Shinedown or Nickelback. The up-tempo numbers like "Into Your Heart" and "Wild Hungry" are sure to gain massive applause should Shakra choose to add these to their live set lists, while the acoustic guitar and piano work signal the power ballad "Life’s What You Need", Mark’s raspy/ bluesy delivery sending chills down the spine to the good.

The musicianship within "High Noon" is high caliber: guitar breaks that aren’t pure shred exercises but actually carry an important mission to add to the value of the song, and guitarists Thom Blunier and Thomas Muster build momentum at varying speeds- check out "Around the World" as it’s more of a heavy metal anthem with cleaner verses that brings me back to early Def Leppard meets Skid Row days. Chances are if you like Gotthard through the years, Shakra have also met a similar level of appeal – easy on the ears choruses and natural hooks that sink deep into your soul.

Shakra are one of the leaders not only from Switzerland in the melodic hard rock community, but worth discussing in the bigger world picture for their consistency and songwriting class.

HEXVESSEL – When We Are Death