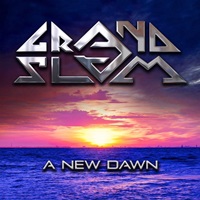 Originally focusing on being more of a studio recording act, Sweden’s Grand Slam has taken their time since beginning in 2007 to hone in on the right musicians and songs. As it’s now 2016 and outside of television show appearances and worldwide songwriting contests, not much has been heard from the quintet until their 2014 "Waiting for Tomorrow" EP release. "A New Dawn" is their debut full-length on renowned melodic rock label AOR Heaven, so the time appears ripe for these musicians to gain traction in a solid, catchy style filled to the brim with vocal harmonies, strong keyboard/ guitar hooks, and a steady rhythm section to bring these 10 tracks home.

Featuring a high pitch singer in Andy Sinner that resonates in that register that could be part glam, part AOR (think everything from Joey Tempest to Michael Sweet), songs such as "Rock My World" and "One Way to Heaven" definitely scream of a happier time circa the 1980’s, when bands like Bon Jovi and Europe gained multi-million album sales and sold out arenas worldwide. Guitarist Andreas Gullstrand even flexes a little bit of his bluesy flair for "Don’t Leave" that recalls the early 80’s Scorpions era. Keyboardist Daniel Grönberg Svensson places proper emphasis on leading proceedings at times through his opening piano sequence that propels the harmony laden "Light Up the Sky" while supplementing the axe hook and pumping bass line on another personal favorite "Waiting for Tomorrow".

Closing out with a Gary Glitter meets Def Leppard style anthem in "Don’t Mess with Me", Grand Slam lives up to their home run potential – understanding the right balance of killer lead breaks and smart segment construction to keep the listeners on their feet. One to watch over the coming years.