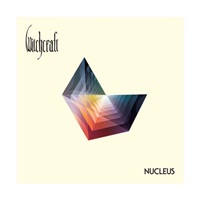 Change appears to be a constant in this Swedish band’s career. Pared down to a trio, only vocalist /guitarist Magnus Pelander remains from the early 2000’s as bassist Tobias Anger and drummer Rage Widerberg make their recording debut for "Nucleus" – the fifth Witchcraft studio full-length. At 9 songs and 69 minutes, the three-piece sway between conventional songs and epic-length offerings of psychedelic heavy rock with doom inflections.

Lumbering evil chord combinations along with equally chilling vocal inflections set opener "Malstroem" on an 8:31 churning sea of emotions – occasionally lifting to mid-tempo heaviness before the doom measures ring true again. Natural raw guitar tones along with a primal rhythm section makes for infectious groove-oriented combinations where shorter songs like "The Obsessed" and "Theory of Consequence" illustrate Witchcraft’s affinity for tight chord sequences and jamming ideas deep into your cranium. Woodwind/flute and keyboard passages give "The Outcast" some Jethro Tull inflections, yet Magnus’ wah wah solo brings them back to their heavy 70’s rock roots.

Two of the songs (the title cut and "Breakdown") take up 30 minutes of the running time – wisely slotted mid-album and at the end. Magnus using more of a Jim Morrison-esque voice early on for the former but then gaining more girth and passion as the verses move forward while the music fluctuates between electric and tranquil parts, the concluding 5 minutes haunting through doom repetition – while the latter resembles the psychedelic, illuminating, terrifying roller coaster in mind, body and soul that it’s title indicates.

A breed all its own, "Nucleus" won’t disappoint the longtime Witchcraft followers – and could gain a lot of newcomers to the doom/heavy rock fold.