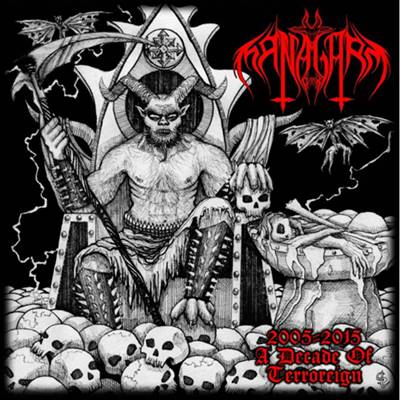 Dark Managarm is yet another French black metal band to cross my path lately, a band that I had never heard or read anything about previous to receiving a promo version of this compilation of theirs. Musically, I would argue that these guys have vomited forth that particular vile stew of black metal akin to Dark Funeral, War (the Swedish War, mind you), and some of the early Marduk releases. Furious, aggressive, and at times chaotic black metal, but hardly innovative or original as such. Many have trod this path before and released way more interesting and noteworthy material than this. However, the music of Dark Managarm does have its foul charm in places, more specifically tracks such as "Black Blood" and "Attila".

There are some really catchy riffs and cool breakdowns and whatnot here and there, but the vocals are simply a bit too one-dimensional and hardly convincing enough, which is a shame. On the other hand, if hyper-speed black metal lunacy in the Swedish vein turns you on then this compilation might appeal to you. It is certainly a good introduction to Dark Managarm in that you get 10 tracks off 4 different releases of theirs plus 2 bonus songs and a couple of raw live cuts. 14 dark hymns in total. Having said that, do not expect anything new or revolutionary as this follows a tried and tested formular that hardly sets the band apart from numerous other black metal outfits.

CRYPTOPSY – The Book of Suffering – Tome 1