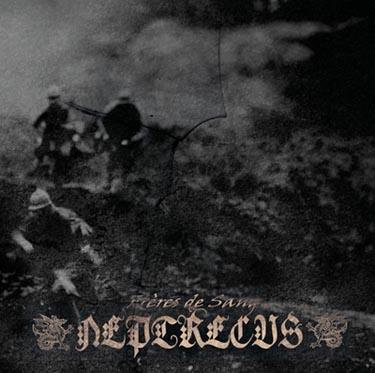 The French black metal horde named Neptrecus has returned with a follow-up the 2013 debut album ("L’aube du déclin"), and this sophomore effort is entitled "Frères de Sang" and consists of 9 tracks. To be perfectly frank, the album is basically run-of-the-mill traditional black metal in the vein of some of the early Norwegian pioneers such as Satyricon, Mayhem, Enslaved, and the likes. While not as lo-fi as many other black metal outfits, the sound spawned by the members of Neptrecus is somewhat rough around the edges, and many of the riffs are cold and trebly. Catchy and good riffs do crop up from time to time, but the actual songs are too uneventful and undynamic. It is as if they are devoid of atmosphere most of the time, which is a damn shame, because these guys do show some potential in places. Too bad things never really take off and pull the listener in. Also, the vocals are hardly engaging at all.

The album is neither a complete waste of time nor a travesty, but nevertheless it is way too mediocre for my taste. Maybe next time?