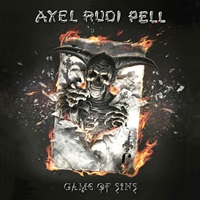 Resolute in a love for all things Dio-esque Rainbow or Ritchie Blackmore oriented hard rock (Blackmore’s Night excluded), German guitar hero Axel Rudi Pell churns out another studio album with "Game of Sins". His 16th full-length of original material, there’s a familiarity to his song craft- so know going in that you’ll have a mixture of straight ahead hard rockers, the occasional epic arrangement, as well as a couple of ballads to diversify the proceedings.

What’s helpful is that amidst the shred-worthy lead breaks that occur during "Fire" and the mid-tempo "Falling Star", you’ll also get instrumental moments where his bandmates shine, like drummer Bobby Rondinelli during the final third of epic "Till the World Says Goodbye" or keyboardist Ferdy Doernberg layering somber notes during the ballad "Lost in Love". Long time ARP vocalist Johnny Gioeli (together since 1998) has that powerhouse, bluesy delivery down pat – a little Coverdale/Dio oriented throughout, highlights including "Sons in the Night" and the aforementioned epic "Till the World Says Goodbye" – very much in the early 90’s Sabbath mold when Tony Martin took the vocal reigns. Axel’s influences are obvious, but through the years he’s always managed to balance his proficient skills with an understanding of writing proper melodies, hooks, and individual songs – making this 10 track album go by rather quickly even though it’s almost an hour in length.

Those who choose to buy the digipack physical version of the CD will get his interesting remake of Bob Dylan’s "All Along the Watchtower" – taking a new route for the first couple of minutes in almost as a serene homage before the main electric action kicks in and you’ll feel the energy rise. In comparison to his long history, "Game of Sins" has a lot of throwback appeal to "The Masquerade Ball", but still hasn’t quite eclipsed the brilliance of "Black Moon Pyramid", my favorite Axel Rudi Pell effort.