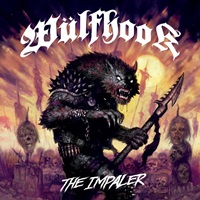 Detroit, Michigan is where this traditional metal band Wülfhook call home, and their debut album "The Impaler" sends a lot of signals to the old school 80’s when taking in these 10 tracks. The guitar work throughout has that heroic attitude, full of twin harmonies and dazzling riffs that were prevalent during the Iron Maiden/ Judas Priest/ Accept reign of 1980-1985. Some will even think about "Thundersteel" during sections of "Eternal", while vocalist Jeff Schlinz has one of those piercing yet fierce ranges that recalls Rob Halford and James Rivera if given a little bit of a Jon Oliva or Steve Grimmett edge during their prime screaming days.

Some of the material has that charging march or gallop nature that traditional metal has been missing lately – check out "Devil’s Harlot" as the proper anthem for Wülfhook fans to lead as their future battle cry, the lead break from Jeff Dudick and Matt Martin sure to make many think of Tipton/Downing or early back and forth work from Murray/Smith. An intriguing cover choice of Van Halen’s "Atomic Punk" ends the record, not bad by any means and proof of how heavy the first album was for this classic US hard rock band back in 1978.

German fans will probably gravitate easily to this quintet first – but there’s something for everyone who misses that primitive, go for the throat nature to true metal. Clear production values that aren’t over-processed, mesmerizing guitar tradeoffs, strong main riffs and diverse mid-tempo to energetic arrangements makes "Brutal Nightmare", "Bridge Burner" and the aforementioned "Devil’s Harlot" irresistible to incessant devil’s horns and neck snapping antics. Brilliant material and gives me hope that America still has many interesting traditional metal bands bubbling out of the underground.