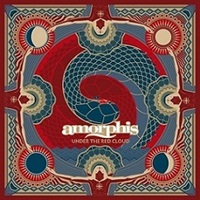 AMORPHIS – Under the Red Cloud

The best bands never stagnant, always ever evolving in their quest to seek out the best songwriting and capture it brilliantly for that time period. Amorphis of course set a progressive/doom/death landmark early on through their second album in 1994, "Tales from the Thousand Lakes" – but took a turn for more melodic heavy metal/ melancholic rock pastures in ensuing efforts. Their audience delights in these shifts, making "Under the Red Cloud" another magnificent outing for those who want to see how cultural and folk textures can be brought to the death/melodic metal table. Must be something in the Finnish upbringing and climate that inspires and develops pure gold.

Addictive progressions that build into waves of aural ecstasy, you can’t help but be swept away by the keyboard and guitar maneuvers as the simple bass/drum tempo slams home "Bad Blood" and the folk flavorings on the follow up "The Skull". The vocals often incorporate their death legacy but for the most part Tomi Joutsen rules in a clean, atmospheric and uplifting manner. Tomi Koivusaari and Esa Holopainen exhilarate in electric tandem work, using a lot of tools from pedals and extraneous sitars/ whistles to get across some of the deeper tribal inflections for the stirring "Death of a King". Locking onto the right hooks while still being metal at heart, Amorphis consistently create captivating arrangements that should have their audience singing, cheering, and clapping along.

Juggling the heavier material like "Dark Path" with the more playful, melodic title track for instance ensures Amorphis never waver in their ideal to expand their style to the furthest reaches possible. As a result, "Under the Red Cloud" is another platter worth many hours, weeks, and months of intense appreciation- especially in preparation for future live performances when they hit your territory. Beaming from a beacon few others can attain, the Finns win again.