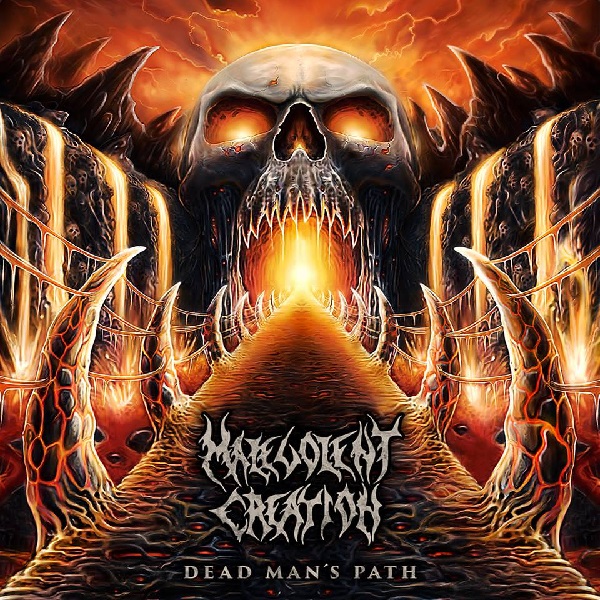 In my early tape trading years of the late 80’s and early 90’s, Florida’s Malevolent Creation are one of the bands that set the US death metal scene on fire. Their early albums "The Ten Commandments" and "Retribution" still stand well today for their aggression, intensity, and overall impact on the next generation of death metal musicians. Controversy and lineup changes have been a constant ever since – but before us we have "Dead Man’s Path", their 12th studio album and first in five years, and possibly a return to those strong early career benchmarks.

The band balance out speedy numbers with mid-tempo sections that can still pummel the airspace – the riffing and tenacious picking from Phil Fasciana and Gio Geraca highlighting "Blood of the Fallen" and the swooping follow up "Resistance Is Victory". The opening title track is an intriguing starter, as the quieter buildup is something one would expect maybe from Metallica, but oddly enough works as a dynamic mood mover because of the spoken word eeriness from Brett Hoffmann and doom-oriented chord choices. To those that miss a lot of their Slayer on steroid aspect to some of the wall of sound and thunderous drumming, check into "Soul Razer" for all your intense metal pleasures.

Brett’s rasp hasn’t lost any edge over the years – and as one of the elder’s vocalists in the business, also pays careful attention to be as clear as possible so that you can catch all the words in obliterating arrangements like "Imperium (Kill Force Rising)" and "Fragmental Sanity". Air drumming, head banging, hair windmills – Malevolent Creation musically are firing on all the right creative cylinders, making it hard to believe that 28 years have passed since their inception.

A lot of these songs will slot easily in future set lists. If you’ve lost sight of Malevolent Creation, "Dead Man’s Path" should be the restart point.