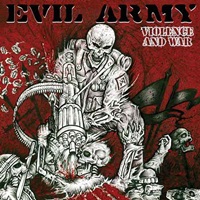 Memphis, Tennessee isn’t the most likely place to expect a speed/thrash metal trio to exist, but that’s the case here with Evil Army. Plugging away in the underground since 2003, the band has a plethora of split, single, album, demo, and EP efforts – only taking a break from 2010-12 as guitarist/vocalist Rob Evil dealt with life behind bars. "Violence and War" is a 5 song EP that goes for the jugular and doesn’t relent. Just the way I remember the early days of speed and thrash from the 1980’s – raw, relentless, full of punk angst and sensible transitions that aren’t going to necessarily appeal to the more commercial audience fringes.

Early Exodus, Sodom, and Metallica probably factor into most of the trio’s framework – locking onto the right speedy, tasty riff and supplementing things from an equally strong tempo perspective, getting to the heart of the hook is what takes these 2-3 minute arrangements into the hearts of the metal underground. "Deathbreath" chugs along at a "Kill ‘Em All" mid-tempo clip, while "Army of Doom" has those stop/start elements that made early Sacred Reich so incredible, drummer Michael Murder living up to his name sake in terms of his furious fills and blurring snare/hi-hat hits. Rob’s sadistic, spitfire vocals match the adrenaline-oriented riffs and rhythms – and the production values are equally primitive as if the band took a time machine back to 1983.

Before you know it, 14 minutes have elapsed and the EP concludes. Let’s hope that Evil Army’s next release is another full-length, as they have the creativity, execution, and musicianship to sustain a solid 10-13 track album.