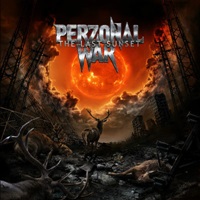 Certain bands hover in that netherworld, you aren’t quite sure if they are one genre or another – and that can clearly be the case for German power/thrash band Perzonal War. It’s safe to say on their new album "The Last Sunset" the band still profess a love for all things Metallica, especially in terms of guitarist Matthias Zimmer’s Hetfield-esque vocal delivery and a lot of the thick riff wall of sound you hear on "Speed of Time" and "I See Nothing".

At other times, restrained clean guitars and more of a power sheen take over, especially on opener "Salvation" plus the moodier "Never Look Back", which can make you think of Annihilator or Metal Church where things shift between quieter verses and heavier choruses. As a result, "The Last Sunset" probably fills more of a niche audience than anything, due to the fact that it’s not going to be balls out enough for the thrash crowd, yet can be slightly too heavy at times for the more melodic, old school power audience.

Active for almost 20 years, Perzonal War seem content in their diversity, and the dynamics they display in terms of their songwriting keep the listener engaged. Kudos to Metalville Records for allowing the band to keep delivering their unique power/thrash arrangements, no matter how large the following for this may be. Those who enjoy a little more melody on the vocal and music front could make "The Last Sunset" a hidden gem album.