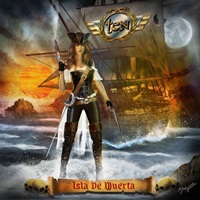 The 12th studio album from UK melodic rock band Ten, "Isla De Muerta" hits the streets rather quickly after last year’s "Albion" (which came out in November). The seven-piece act are fairly keen on churning out a steady stream of hooks in the musical and vocal department, sometimes exotic for "Karnak – The Valley of the Kings", or fairly straight forward in more of Whitesnake meets Magnum manner on "Tell Me What to Do". Vocalist/ main songwriter Gary Hughes has a smooth, silky delivery, and the guitar breaks from Johnny Halliwell, Steve Grocott, and Dann Rosingana keep the proceedings more on the guitar hero/ metal side.

Keyboardist Darrel Treece-Birch thrusts subtle dark runs into the mix for "Aquiesce" or more of an 80’s new wave tone for "Intensify" (think Missing Persons meets Loverboy here). The drum tone throughout seems a tad weaker than the other instrumentation – dangerously close to computer programming rather than the sounds of a live human drummer. The guitar playing elevates Ten to another level in the genre – willing to incorporate everything from AOR to heavy metal from the electric six stringers, layering the sound in such a way to maximize the harmonies and transitions. Over the course of this hour plus album you get energetic rockers like "Angel of Darkness" as well as a power ballad such as "This Love".

Those who love "Albion" will probably be equally thrilled with "Isla De Muerta". Productive times for Ten, so enjoy the fruit of their labor as melodic hard rock / AOR is their calling card.