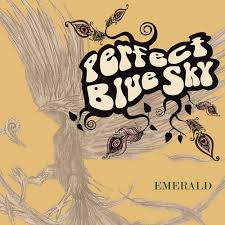 The members of the Swedish band Perfect Blue Sky perform something akin to psychedelic folk music mixed with classic rock. The album has a very strong sense and aura of 60s/70s psychedelic rock while the lyrics are quite uplifting and liberating somehow. A few parallels to bands such as Fleetwood Mac, Led Zeppelin, and Jethro Tull can be drawn. The songs are actually quite serene and mellow in a sense, although there are outbursts and slightly more bombastic parts to be found here and there. However, the album generally consists of calm parts, acoustic guitars, somewhat melancholic vocals, and lyrics centred on positive themes and optimistic messages. While I do appreciate a lot of relaxed and moody music, I must admit that I am neither blown away nor entirely convinced by «Emerald». I was hoping that it would be a lot more moving and make the hair on my fat arms stand up, but for some reason the album never really takes off and the music does not manage to get under my skin, which is a damn shame. If soothing and relaxing rock with psychedelic elements to it is your thing then by all means give «Emerald» a shot, but personally I am just not that impressed by this.