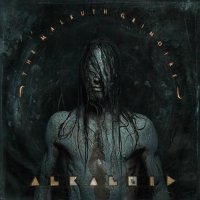 The hype surrounding "The Malcuth Grimmoire" has been such that, after finishing my review to the magnificent new Barren Earth album, so far having given this one a mere cursory listen, I decided to immerse myself in it. To say that I do not regret this decision is an understatement because what I discovered made me ask myself why I waited this long. In my humble estimate, this album is as groundbreaking as works of Atheist, Death, Obscura or Edge of Sanity, to name but a few. Surely, in terms of "we do whatever we want and you will like it because we’re that good", Alkaloid can easily stand with Dan Swäno’s most known outfit. Rarely have I heard such an impressive fusion of variety and ability on the same disc that would not go over my head or downright bore me. But Alkaloid has claimed me as their avid fan from the first album. How fortunate that Alkaloid is not serving us neither dry riff-salad death metal nor endless experimentation understood by, and pleasant to, merely the creators, but offers a little bit of both, playing with possibilities rather than raw certainty. And all this would be pointless had they adopted the early Darkthrone approach to recording HEAVY metal, a temptation which, if they even considered giving in to, they thankfully and successfully resisted. The Malcuth Grimmoire (TMG) sounds massive, raw and clear all at once. This a death metal record through and through but progressive to the furthest extent of all four of the world’s directions. This is one of those records (at the risk of auto-plagiarism from my review of last Ulcerate record) you can’t just play in your background, while you do anything else but actively listen. I am tempted to dissect bit by bit and search its every nook and cranny, but am reminded of the danger of forgetting the sheer joy of listening to supreme quality music at the altar of proper understanding. We must strike a balance between the two if we are to get the most out of any piece of art. Because of my highly analytical mind, however, I am a sucker for complexity so I tend to favor the dissection over joy, which is why have no time for sheer minimalism.

Already the first track "Carbon Processes" makes us aware that we are witnesses to lyrical and musical high class in talent, ability and innovation. My first spin got me thinking Tool’s "Lateralus" for this cadence and acapella phraseology Alkaloid utilizes, but this is, of course, death metal, which they make abundantly clear. The track is over 8 minutes long but the twists and turns, the use of multiple styles of vocalization and hooks galore, plus the phenomenal command of the instruments, make this one one of the record’s standouts. Indeed after a few spins it will invade your mind like the alkaloids – the biological agents from which the band has taken its name, and you will wake up humming the main chorus.

The second track is death metal proper, technical and all over the place but still catchy. Again, the penchant for varying pace and momentum is maintained throughout as they slow down for gorgeous passages and solos, and very impressively end it with a variation on the main theme from the opener, preserving the continuity. Alkaloid are tapping into the good old tradition of classic albums like "Vulgar Display of Power" or "Master of Puppets" in terms of variety and marriage between heaviness, melody and brutality, because the next track, about every metaller’s favorite character, H.P. Lovercraft’s own Cthulhu (kutulu), is a much heavier Morbid Angelesque Nilish nastier, uglier brother of "Where the Slime Live" (from Morbid Angel’s Domination album) yet equally recalling early Machine Head and latter day Megadeth, with not an ounce of sacrifice in melody or catchiness. Yes, much like the previous two, this track will stubbornly refuse to leave your head. This time around, Alkaloid is simply serving good old death metal Trey Azagthoth-style instead of bending your mind with time signatures and such. They know when to "show off" and when just to have fun, if the use of Aboriginal/Nile-like echoey vocals is any indication. And we are barely on the third track, people!

In case you thought that you had this thing figured out, in comes another technical crescendo riffery faster than anything so far on the album, "Alter Magnitudes". Short and sweet, the track recalls All That Remains and latter Death and rewards a patient listener with a near-classical solo before it disappears as suddenly as it appeared. Again, Alkaloid keeps things interesting but also keeps the average listener’s short attention span in mind by inserting short tracks between the lengthy, experimental ones. And experimental they are because it is the next two tracks that truly put "progressive" in Alkaloid’s death metal. While "Orgonism" is a death metal ballad, if you will, that, again, reminds me of Machine Head for the ten ton hammer riffs, featuring some of the best vocal and melodic harmonies on the album, it is the four part "Dyson Sphere" that fully showcases Alkaloid’s ability as songwriters, thinkers and musicians, as they interplay between light and dark (the oortcloud is demonic!), creation and evolution, sets the stage for instrumental and vocal acrobatics, with a surprising nod to Iron Maiden at the end of the third part. At times, this recalls Devin Townsend in the scope and craziness, but Alkaloid is more controlled and never too far from pure death metal, even when experimenting on such scale. And just so you don’t forget that this is, after all, a death metal band, a fantastic, currently my favorite, title track, plows through with dizzying speeds and heaviness in the form a perfect death metal anthem, a more than worthy summary of the album’s prowess and scope.

What can then be offered that hasn’t been offered before? Well, how about an instrumental doodle that recalls Metallica’s "Anasthasia – Pulling Teeth" off of their debut album? With "C – Value Enigma", it’s almost as if Alkaloid were bragging at this point. But so you don’t think it were so, the closing monstrous "Funeral for A Continent" (Europe?), at over 12 minutes, offers such an array of melody, riffs, instrumental intricacy and virtuosity, vocal prowess and exemplary songwriting, all of which would be borderline melodeath were it not for the injections of relentless brutality which both skillfully disturbs the flow and carries the song to the grand finale, that this single track is well worth the price of admission alone, as Alkaloid leads through a roller-coaster with speeds ranging from very slow through average to breakneck. And none of it feels forced or as if it didn’t belong there, as if we were given too much. A gorgeous delicate melody that, I don’t why, reminds me of certain "Load" (Metallica) guitar sound, ends this masterpiece in every sense of the word. The only regret – probably won’t see this one on U.S. store shelves, but I hope I’m wrong because this is well worth fasting for a day or two in order to purchase at, no doubt a much higher than usual price, as an import.

There is nothing more that can be said but there is one more thing that can be done, my European friend. Run like hell to your nearest record store and obtain a copy for every member of your family and let’s see if we can make this go platinum. Don’t be a jerk and just download it for a crappy 128 kbs "quality", actually BUY it, please, especially since they funded the effort themselves! As for me, I salute thee, Alkaloid!