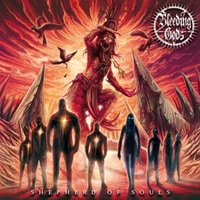 Forming out of their seasoning in several Dutch metal acts like Altar, Supreme Pain, and Sinister, Bleeding Gods is a new outfit delivering heads down death metal with thrash overtones on their debut album "Shepherd of Souls". Outside of the acoustic/ narrative "Ixmucané (I)" 3 minute piece that appears as the fifth track, the 9 other cuts focus on a groovy concoction of heavy riffs, growly (but discernable) vocals and tempos that range from up beat thrash and blasting action to solid metal parts that force audiences to elevate adrenaline to unforeseen levels.

Meat and potatoes cuts like "Abyss of the World", the Slayer-esque "Rise from Ashes", and hauntingly evil "Human Weakness" serve notice that this quintet is perfectly content to just keep their sound at the roots of the movement – not overly technical but crushing just the same. The final song "Symbolic Sculptures has a lot of rhythmic qualities both vocally and musically to the early Obituary years during the first half of the song, before Edwin van den Eeden elevates his drumming to punk-like thrash madness around the 3:20 mark with some Lombardo-like kick fills.

A lot of us long-timers in the world have enjoyed the expansion of the metal genre and all of these sub-categories that have taken place – but there are times when you just want a band that cuts through everything and just rocks so to speak, without pretense and coming from the gut. If you are in this camp, Bleeding Gods and "Shepherd of Souls" does not disappoint for a 42 minute record. Primitive production, primal outlook, and punishing product equals a throwback to death metal’s roots.

RELOAD – Hotter Than a Bullet