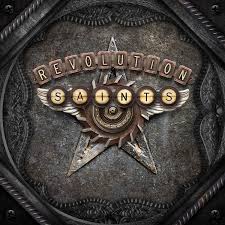 It was a rather sad day when guitarist Doug Aldrich announced that he had decided to leave the mighty Whitesnake and instead focus on other bands and projects of his, but when I read and heard about this new band named Revolution Saints featuring Aldrich on guitar, Deen Castronovo (Journey) on drums and vocals, and Jack Blades (Night Ranger) on bass, I got really excited and my hopes soared. I was hoping that this self-titled debut album by Revolution Saints would rule and deliver on all fronts, but I must admit that I was left sorely disappointed by the musical output. As talented as the musicians may be, the songs simply lack those qualities that make for great tunes. Nothing really sticks out as amazing, and most of the time I am left feeling that I am listening to lightweight rock songs that never really take off and fucking deliver! The album as a whole lacks feeling and substance, and despite the excellent musicianship and decent vocals the thing just falls flat and instantly loses steam. Not a complete and utter waste of time, but a letdown nonetheless.

AT THE GATES – Oslo – Vulkan Arena