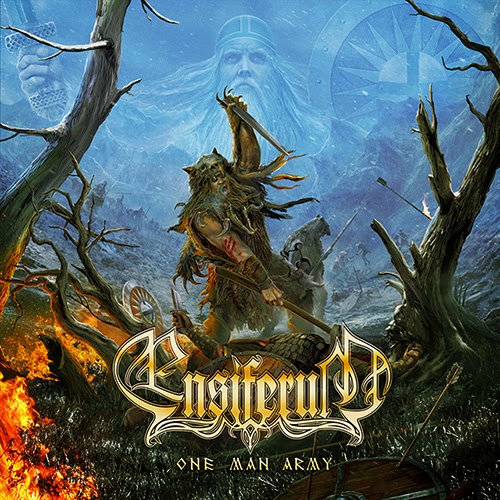 One of the true folk metal giants are back with the release of the album "One Man Army". A beautiful album that will probably fit right in to a standard folk metal collection.

The album starts off with the track "March of War". A track that sets the epic atmosphere in motion, and that immediatly sucks the listener in to the epic experience.

Second track is "Axe of Judgement". The song may be less ambient, but it really keeps the epic tone that the last song set. Ensiferum really shows through this song that they know exactly what they are doing. Perfectly balanced between epic folk music and metal. And the choir twoards the end is making an absolutely beautiful effort to make the song more melodic.

"Heathen Horde" continues the journey into more choirs and melodies that could have been pulled right out from a musical version of Game of Thrones. Nothing more to say about it than that it was absolutely enjoyable from start to end. Well pieced together.

The title track of the album can remind somewhat of a mix between old speed metal, newer power metal and the folk metal it is meant to be. The mix works quite fine, and adds more power to the album. A fast paced song that will probably apply well with fans of the more extreme genres. The song could however have been without the solo in the middle of the song without losing anything significant.

Onwards on this epic journey, we find probably one of the most beautiful tracks to be made this decade. "Burden Of The Fallen" gives a nice, slow calm, and it feels like a song that could make anyone feel lighter. Only downside is that it is far too short.

"Warrior Without a War" might seem a bit less inspired in the begining, but it quickly falls into a totally different level, and really helps the listener to be even more lost in this Lord of the Rings like world that the album has already created.

"Cry for the Earth Bounds" starts off with a choir part that could be dropped out. No one would probably miss it if it were gone. The song would work better if it started right off on the more musical part of the song. Mainly because the rest of the song is so much better than the intro. The ending of the song is absolutely beautiful.

The song "Two of Spades" returns to the speed metal-like sound. The pacing of the song is a little weird some places, but the song makes up for it by having a part in the middle that sounds alot like the bass line from Pink Floyds "Another Brick in the Wall". The song breaks into a very folkish number with alot of clapping and weird melodies. The song is very weird in a very good and fun way.

Close to the finish line comes "My Ancestor’s Blood". A song that absolutely gives off a vibe of pride and glory. This is what folk metal is supposed to sound like. Nice beats and a good melody, and a beautiful part at the end that flows nicely into the next song, "Desecendants, Defiance, Domination", which is the longest song on the album, and also the best. Folk metal is usually at its best when it get a longer time to discover its own true potential, and that’s exactly what this song does. Elements like clean vocals, growling, epic solos, nice pacing and some – again – beautiful choir parts make this into the strongest tune on the album.

And to round it off, we get the track "Neito Pohjolan". A weird mix of "western cowboy" and Finnish folk music. A weird mix, yet still fun to sit through. A nice way to end a nice album.

This album has so much to give the listener, and for the most part, it delivers. Anyone that likes folk metal will have a great time with this album. Alot of good parts, some great parts, yet no parts that are directly bad or boring. Just like a good album is supposed to be.