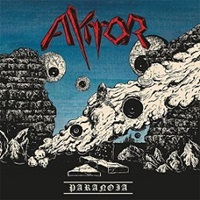 An international trio consisting of Professor Black from Chicago, IL and Finnish musicians Jussi Lehtisalo and Tomi Leppänen, Aktor perform an infectious brand of metal that has Top 40/ psychedelic inflections. Expect straight clean vocals, simpler focused chord progressions, and a lot of keyboard nuances from the new wave community (think Berlin and Missing Persons). Acoustic guitars add a breezy touch to "Too Young to Die", while "Devil and Doctor" has a little bit of The Cars rock n’ roll spirit, if thrown into a little bit more of a BOC spell.

"Six Silver Suns" has a lot of that galvanizing gallop and guitar gusto that gains further appeal because of the older keyboard accents – something I could expect coming from UFO during their "Phenomenon" heydays. There are some brilliant lines from Professor Black – he of High Spirits, Pharaoh, and Dawnbringer notoriety – "Something Nasty" during the chorus encourages the listener ‘you better stay away from everywhere’ as he moans ‘ahh… awwww’ during the end of the chorus.

Oddball dark chord combinations also give us a brilliant track such as "Where Is Home", the guitars very brooding and the mid-section exploring a lot of strange synthesizer tones, before a mini-gallop takes place in the mid-section. Aktor even has a little bit of that "Heart of Glass"/ Blondie era rhythmic swing during "Never-Ending No", and that’s not something you really expect… but then again, "Paranoia" overall is not an album I think anyone really could imagine from 2015.

Speaking from altered and incomplete states of being, these 10 songs will probably cultivate a very small yet dedicated following. Aktor hopefully will not be a one album act – there is much more to explore based on their honed in bank of influences.

BLIND GUARDIAN – Beyond the Red Mirror