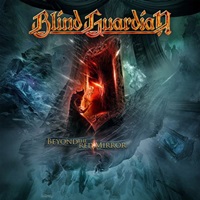 BLIND GUARDIAN – Beyond the Red Mirror

The almighty Blind Guardian – leaders in not only the German metal scene for their brand of power metal with progressive/symphonic touches, but also fueling the international market place. Fans await each studio record in anticipation of what will take place next, given the fact that the band takes 4-5 years often between new releases. "Beyond the Red Mirror" follows up one of their most successful albums in recent years, 2010’s "At the End of Time", which seemed to bridge a lot of their old fiery attack with their choir vocal parts and larger than life musical layering. Veterans that they are, Blind Guardian again reach back into their more progressive, "Imaginations from the Other Side" days, and deliver another musically adventurous but highly melodic/ harmonic offering.

"The Ninth Wave" at 9:29 is a blockbuster opener, featuring all the choir buildups, guitar tandem workouts, and Hansi’s naturally dramatic mountain top / bard-like vocals all taking this dramatic arrangement to the heads and hearts of the fans – especially enjoyable are the slower, rhythmic elements against the closing Queen-oriented multi-part vocals. First single "Twilight of the Gods" has that speedy, "Born in a Morning Hall" like riff charge, again employing a dual high pitched versus natural vocal tennis match during the verses. Because the band pack so much musically into every track, the layering does give the listener multiple ways to take things in – and I think gives the band an advantage in a genre that can often be very predictable or wear out its welcome quickly. Sometimes fusing heavier riffs and more bouncy drum tempos for aggressive emphasis on "Ashes of Eternity", other times slow building and emotionally dramatic as if simulating a medieval march for "Sacred Mind", all members understand the need for varied arrangements to ensure a seamless full-length journey.

"Miracle Machine" is the quieter 3 minute song that sets things up for the "Grand Parade" finale. At 9 minutes and 29 seconds, you’ll get everything from epic/ cultural style guitar lines, sweeping orchestral movements, more cinematic choirs, a slower, emotive lead break and a closing that’s fit for "Nightfall" comparisons. Having the time to absorb all the content for a few weeks, "Beyond the Red Mirror" is a logical follow up to the last studio album, and probably will slot very well in their catalog of records. I do think there are times they over-use the multi-part choir approach, but André Olbrich and Marcus Siepen are a magical axe duo that continue to bring their A game to the power proceedings – using all the tools in their box of tricks to execute at the highest caliber possible.

It’s Blind Guardian – what more can be said?

NOCTURNUS – The Science of Horror