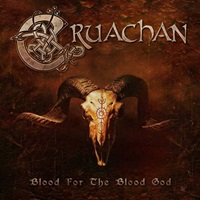 CRUACHAN – Blood for the Blood God

My first go around for this Celtic/ folk oriented metal band, featuring a lot of extreme, cultural, and black influences. "Blood for the Blood God" is this Irish sextet’s seventh studio album, and appears to be a great fusion of all these swirling sub-genres to engage the ears through 12 dynamic arrangements and almost an hour long journey to Celtic folklore and Irish history / mythology. The members are equally comfortable throwing down folk parts and using tin whistles, mandolins, flutes, and pipes to get their ideas across- then ramping up the intensity through blast beats, high pitched guitar action and vicious screams, both of which can be heard in early highlight "The Arrival of the Fir Bolg".

Keith Fay and Kieran Ball wield mighty electric axe harmonies, keeping the Celtic culture alive in an epic manner on "Beren and Luthien" while drummer Mauro Frison administers pounding tribal grooves and a natural metal foundation underneath it all. The songwriting trades off between the heavy and folk songs, so those that are up for a bit of jig and wish to sing in unison or clap along, take note of "The Marching Song of Fiach McHugh" and "Gae Bolga" the most while "Born for War (The Rise of Brian Boru)" and the title track contain more of the requisite heavy riffing and extreme elements that keep Cruachan closer to the underground.

The outfits, the stories, and the imagery – everything matches up wonderfully to place Cruachan in rarified air, their ability to meld influences in such a way to keep the hooks overflowing in musical and vocal directions. Ending on an interesting extreme first, turn on a dime folk note second for the 4:20 rollercoaster "Pagan", Cruachan possess appeal for those who love Primordial as much as they may love Renaissance music, without succumbing to a lot of the party folk tricks. Time for me to seek out more of their back catalog.