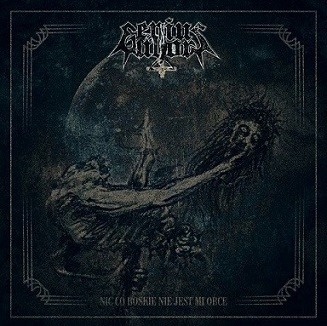 Genius Ultor is a filthy, blasphemous, and foul black metal project vomited forth back in 2008 in Poland by members of the band named Stillborn. "Nic Co Boskie Nie Jest Mi Obce" is Genius Ultor’s second full-length assault following the debut album from 2010, and it contains 7 ugly, raw, and misanthropic tunes that are all pretty simple and straight-ahead. Actually, that’s not true…the last song is an awful acoustic piece based on the Impaled Nazarene song entitled "Blood is Thicker Than Water". Anyway, this is some intense and barbaric music with a bombastic edge to it, but I must admit that I found myself getting inhumanly bored by it after a while as the album simply turns monotonous and repetitive in the long run. There is not a whole lot of variation present on the disc in terms of atmosphere, and the over-the-top vocals do get in my nerves a lot of the time. Sure, there are some strong riffs here and there, and some of the slow parts and breakdowns are okay, but as a whole I’m simply not impressed or blown away by "Nic Co Boskie Nie Jest Mi Obce". It does have its sick and ferocious moments, but not a whole lot more than that, unfortunately.